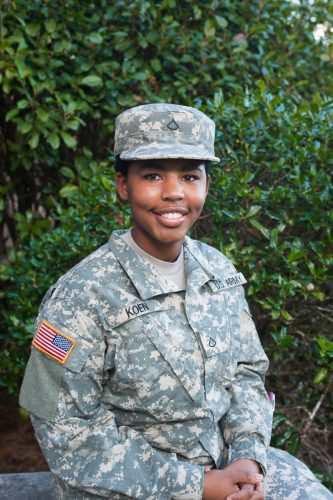 Like most students on the cusp of graduation, Rebekah Koen is determined to make a difference. As a social work major at UM, Koen’s motivation to affect change in the world comes from a very real place. Her family was in and out of homeless shelters throughout Koen’s high school years. While most her age were only in the beginning stages of life planning, Koen’s firsthand experience with shelter systems and policies opened her eyes to her own calling early on.

“Some of the shelters that we stayed in, I saw how they were run and I said, ‘I want to get into that,’” said Koen. This realization led to her involvement in the Boys and Girls Club of Brookside, where in 2013, she started GirlTalk. Through this program, she encouraged female empowerment and helped bright young women, ages 10 and up, gain a platform. Her impact on the club and the relationships she built there led to her nomination for Youth of the Year during her senior year of high school. Her five application essays and interview won her the award.

This habit of involvement only continued to grow when she arrived at Montevallo. Koen is a peer mentor for the Honors Program, a McNair Scholar, an orientation leader, an SGA senator for the College of Arts and Sciences and a volunteer for Shelby Emergency Assistance — just to name a few.

“I joined all of the programs on campus because I kept thinking that at some point it would be too much,” said Koen. “But they all kind of overlap, and I ended up getting to know a lot of great people which made me want to join other programs. So, I feel like I’m getting the absolute most out of my college experience.” In addition to her extensive involvement on campus, Koen is also a specialist in the Alabama National Guard.

“I joined the military the summer before I started at UM,” said Koen. “I’m a planner, and I wanted to make sure that I wasn’t going to acquire too much debt. They have tuition repayment programs and help out with your student loans; and you get a stipend provided that you meet certain requirements.” Despite all her activities, she still has a little time left over to hang out with her friends, play vintage video games and delve into her favorite niche book genre — Biblical fiction.

“All of my friends were coming here. So we came, and we toured, and I started looking at the Social Work Program, and I saw the internship program and how the majority of the time students are hired where they have their internship. I learned about UM’s excellent credentials — I’ve only ever heard good things about Montevallo. Everyone is always so happy about going to UM, and I wanted to know why. Now I’m one of those people.”