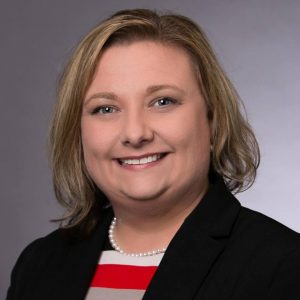 DeAnna McCarley Smith earned a Bachelor of Business Administration degree from the University of Montevallo in 1999 and a Masters in Accountancy from the University of Alabama at Birmingham in 2014. Currently, she is pursuing a Doctorate in Business Administration from Jacksonville University in Florida.
Mrs. Smith began her career with PricewaterhouseCoopers, specializing in audit and assurance services. Licensed as both a Certified Public Accountant (CPA) and Certified Internal Auditor (CIA), she has a broad range of professional experience including external audit, internal audit, financial reporting, budgeting, and non-profit management. In 2008, Mrs. Smith returned to the University of Montevallo to serve as the Director of Budget and Assistant Treasurer. Appointed to the role of Vice President of Business Affairs and Treasurer in 2009, she provided financial leadership for the institution for seven years before pursuing her dream of teaching. Mrs. Smith also served as an adjunct professor at the University of Alabama at Birmingham.
She serves her community as the Treasurer of the University’s Phi Kappa Phi Honor Society, a Director for the Montevallo Development Cooperative District and Treasurer of Leadership Shelby County. In addition, Mrs. Smith devotes countless hours to her son’s school and sports organizations. She is the recipient of numerous awards including Birmingham’s Top 40 under 40, Women to Watch Award for Experienced Leaders by the Alabama Society of CPAs, the University of Montevallo National Alumni Association’s Nathalie Molton Gibbons Young Achiever’s Award, the Algernon Sydney Sullivan Award, and the Alabama Society of Certified Public Accountants Accounting Achievement Award. Mrs. Smith and her family are avid Falcon fans and can be seen at the many sporting events on campus.