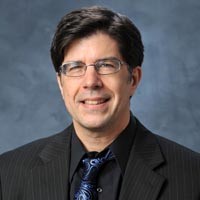 David Callaghan is a Professor of Theatre and current Department Chair in his 21st year on the faculty at UM. He teaches acting, directing and musical theatre performance.  David received his M.F.A. degree in Directing from Western Illinois University and a Ph.D. in Theatre and Film from the City University of New York Graduate Center in Manhattan. He grew up in central New Jersey a short train ride from the Big Apple and past teaching experience includes visiting positions teaching audition technique at the American Musical and Dramatic Academy (AMDA) in NYC and also at Illinois Wesleyan University.

Before coming to Montevallo in 1999, David worked professionally in Philadelphia before residing in NYC for six years where he worked on the casting staff at Manhattan Theatre Club and Meg Simon Casting. David enjoyed opportunities to work on the original Tony Award winning productions of Terrence McNally’s LOVE! VALOUR! COMPASSION! and August Wilson’s SEVEN GUITARS on Broadway. Other projects included working on new plays by playwrights like John Patrick Shanley and A.R Gurney for MTC and Seattle Repertory Theatre; as well as independent films and TV pilots such as “Cosby” on CBS.

David also directed professionally in the Tri-State NYC area including 3 seasons at the Surflight Theatre and off-off-Broadway; with professional credits as an actor at Equity theatres such as the McCarter Theater in NJ and Mt. Gretna Playhouse, PA. While in NYC, David was also fortunate to work as an Assistant Director on the NY and Italian productions of THE RULES OF CIVILITY with Judith Malina’s famous avant-garde company The Living Theatre.

That experience led to David subsequently publishing numerous articles on the company’s work, including an essay in the March 2008 AMERICAN THEATRE magazine. He is also a founding member and peer reviewer of the SDC (Society of Director’s and Choreographers union) Journal’s Peer Reviewed Section and was co-editor of the JOURNAL from 2017–2019. He currently is working on an essay on the avant-garde director Richard Foreman for a new series, “Great North American Directors,” to be published by Methuen Drama Press.

David also frequently participates in panel presentations on actor training and directing, most recently at the national ATHE theatre conferences, most recently in Orlando in 2019. In 2018, he was a member of ATHE’s conference planning committee for its conference in Boston.

He has served as an adjudicator for the Region IV American College Theatre Festival and is a member of the Southeastern Theatre Conference; Alabama Conference of Theatre; Association of Theatre in Higher Education; Equity Membership Candidate with AEA; and an Associate Member of the Society of Stage Directors and Choreographers (SDC). While teaching at UM, he has acted in several regional commercials as well as the pilot for “Life After” on the Halogen cable channel; and also directed musicals for 3 seasons at the Round Barn Theatre in Indiana. David also helped create and performed in an original theatre piece in response to Hurricane Katrina’s impact on New Orleans in NOLA during summer 2008. In May 2008, he was awarded a grant to attend the Commercial Theatre Institute’s 3 Day Producing Workshop in Manhattan.

More recently, David was honored to direct the Pulitzer Prize winning musical NEXT TO NORMAL for Red Mountain Theatre Company in Birmingham in February 2016, featuring Kristi Tingle-Higgenbotham in the role of Diana.  David also directed Jake Heggie’s contemporary opera THREE DECEMBERS for Opera Birmingham in January 2017; as well as two new works as part of Red Mountain Theatre Company’s “Human Rights New Works Festival:  a staged reading of the musical SAM’S ROOM, which is slated for an upcoming Off-Broadway full production in NYC; as well as a developmental workshop production (fully designed) of the 3 character drama TWO HENRYS by NYC playwright Kenneth Jones. In summer 2019 he directed MY FAIR LADY at RMTC at the Dorothy Day Jemison Theatre in Birmingham.

David is also enjoying serving on the Executive Board of Red Mountain Theatre Company in Birmingham.

David was the proud recipient of the 2002-2003 College of Fine Arts Distinguished Teacher Award, as well as the UM National Alumni Association’s “Outstanding Commitment to Teaching” Award in Fall 2004. In 2007-2008, he was selected as the University’s nominee for the Carnegie Foundation CASE Professor of the Year Program.

When not in a theatre, he enjoys traveling, seeing films, spending time with his daughter Quinn, and keeping up with UM alums and theatre friends around the USA.