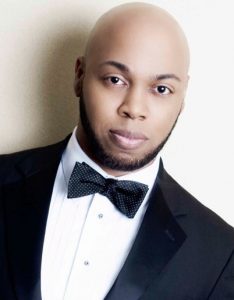 A champion of American art song, Dr. George is a specialist in the study and performance of song settings composed to texts by Paul Laurence Dunbar and Langston Hughes. He sang the world premiere performance of Adolphus Hailstork’s “Four Romantic Love Songs” on poems of Dunbar at the 2012 African American Art Song Alliance Conference at the University of California (Irvine). He is also a noted interpreter of the art songs of Harry T. Burleigh. Dr. George’s professional choral endeavors have included multiple tours throughout the United States and abroad with the American Spiritual Ensemble, and he is a member of the newly formed Jason Max Ferdinand Singers, who premiered in the 2021 VOCES8 Foundation Live from London Festival Series. He is featured on recordings with the American Spiritual Ensemble and he is the tenor soloist in Nathaniel Dett’s The Chariot Jubilee on the 2020 self-titled Aeolians of Oakwood University project.

Dr. George is a Professor of Music and Area Head of Voice at the University of Montevallo, where he was named a recipient of the College of Fine Arts Distinguished Teacher Award. He holds graduate degrees in voice, opera and musical theater performance from the Florida State University and Southern Illinois University (Carbondale), with advanced studies in Austria at the American Institute of Musical Studies. An active member of the National Association of Teachers of Singing and a NATS Intern Program alum, Dr. George previously taught on faculty at Stillman College (Tuscaloosa, Alabama), and more recently served on the artist faculty of the Banff Centre for Arts and Creativity (Canada).

Additional information is available at www.roderickgeorge.com.