For the past three years, the state of Alabama has been in celebration mode.

In 1817, Alabama became a United States territory, and then transitioned into the nation’s 22nd state two years later. In recognition of two centuries of statehood, Alabama’s Bicentennial Commission has been holding events, organizing programs and blanketing the state with opportunities for citizens to get involved in commemorating the historical milestone.

Throughout the state, the University of Montevallo has had a significant impact on the celebration in many different ways, as alumni and faculty have made significant contributions to the program through everything from serving as official ambassadors to strengthening students’ understanding and appreciation of the state’s history in public school classrooms.

Since 2017, the UM family has played a pivotal role in helping the Bicentennial Commission realize its goal of “supporting, creating and executing events and activities that commemorate the stories of our people, place and path to statehood,” by engaging “residents and visitors in educational programs, community activities and statewide initiatives that teach, inspire and entertain.” 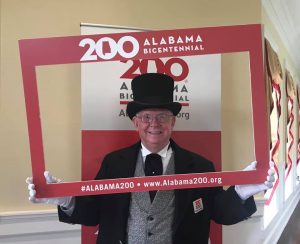 Bobby Joe Seales ’67 is an official ambassador of the Alabama Bicentennial celebration.

The face of the celebration

Before the Bicentennial even kicked off in earnest, one UM alumnus was already serving in one of the most important positions in the program.

In June 2016, UM alumnus and former director of the Shelby County Museum and Archives in Columbiana, Bobby Joe Seales became an ambassador for the Alabama Bicentennial and has spent the past couple of years trekking throughout the state to share information on the program and encouraging residents to get involved.

“I’ve been all over the state doing speeches, riding in parades, just telling people about the importance of our state’s Bicentennial,” Seales said. “It’s beginning to slow down a little bit now, with the Bicentennial culminating in December. I’ve really enjoyed my time as an ambassador. All the people I’ve met while doing this have been so nice and kind.”

For Seales and his wife, Diane, their connections to the University run deep, as they were among the last students to graduate from what was then Alabama College before the university transitioned to its current name in 1969.

Since graduating and settling in Shelby County, the Seales family has been heavily involved in the community and organizations such as the Sons of the American Revolution and the Shelby County Historical Society, which Bobby Joe chaired for many years before retiring in November 2015.

Some of his most memorable experiences working with the Bicentennial program were leading an Alabama trivia event at the Alabaster Library and visiting children at the Alabama Institute for the Deaf and Blind and the Presbyterian Home for Children.

“I’m honored they even thought of me to be an ambassador,” Seales said. “I’ve gotten to work with a great group of people, and it’s really been a pleasure.” 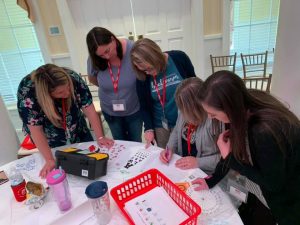 Using the past to inspire the future

Dozens of schools throughout the state proudly proclaim their status as official Alabama Bicentennial schools by hanging banners displaying the designation. One such school is Thompson Intermediate School, where UM alumnae Amber Broadhead and Holly Jackson are leading the effort to incorporate the Alabama Bicentennial program not only into the classroom, but into the state’s entire education system.

Last year, Broadhead and Jackson worked with other teachers at the school to form a TIS Bicentennial Committee, which applied for and was awarded a state grant to help fund an outdoor classroom modeled after historic buildings in Alabaster.

After TIS earned the title of “Official Bicentennial School” in 2018, Jackson and Broadhead worked to form an active student Bicentennial Committee, and the school is now in the running for the Bicentennial program’s “Schools of Excellence” designation, which will be awarded in December.

Through the teachers’ efforts, TIS students have become heavily involved in the Bicentennial program, using it as inspiration for everything from homecoming parade floats to volunteer days at the city’s Fall Festival.

“The Alabama Bicentennial is a celebration for everyone. Everyone’s story matters, because it’s all tied to the history of Alabama,” Broadhead said. “It has helped me create a deeper connection with family, friends, administration, my community, parents and my students.”

After participating in a regional teacher workshop for the Bicentennial program’s Moundville/Tuscaloosa region in 2018, Broadhead said she and Jackson were inspired to organize a similar institute in central Alabama, which was held at the American Village in Montevallo in late June.

During the three-and-a-half day institute, which was themed “Mines, Mills and Mules in Shelby County and the Surrounding Areas,” teachers from throughout the region heard speeches touching on the history of local coal production, agriculture, civil rights and manufacturing.

The institute also included walking tours of UM, Brierfield Ironworks Park and the Aldrich Coal Mine Museum, and incorporated a professional development aspect for the teachers who attended.

UM Professor of History Dr. Jim Day served as the content specialist for the institute and worked to procure historical documents and the speakers for the event.

“It was nice to interact with elementary-aged teachers, since I usually go to high schools when I’m speaking to teachers,” Day said. “We had some great interactions. Many had never been to the University of Montevallo or to American Village, and so it was great PR for this entire area.” 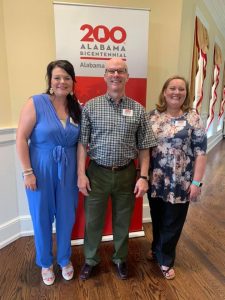 UM Professor of History Dr. Jim Day, center, was involved in the Alabama Bicentennial celebration before it even officially began. Here, he is joined by Broadhead, left, and Jackson, right.

There from the beginning

By the time Day helped with the summer institute at American Village, he already had years of involvement with the Bicentennial program. In fact, he played a major role in the program before it even officially began.

As chairman of the Alabama Historical Commission from 2015-2016, Day helped to plan the three-year Bicentennial celebration on the front end as a member of the Bicentennial Advisory Committee, and oversaw the disbursement of funding for the program as it traveled through the Historical Commission and on to various parts of the state after being appropriated by the Alabama Legislature.

Day said he sees the Bicentennial as a way to make the state’s rich history more accessible to everyone in the state, especially students.

“We really wanted to look at how we could make an impact (on kindergarten through 12th grade) overall,” Day said. “The program facilitates historical education in a very powerful way.”

For the past few years, the Bicentennial program has made historical Alabama artifacts available to be rented out to schools throughout the state, including books, documents and pottery. The program also provides schools access to backpacks containing historical items covering themes such as the Civil War, Native American culture, the Civil Rights Movement and Alabama’s state symbols.

Day said he has been honored to be involved in the state’s 200th birthday celebration and said it may serve as a template for other states planning their own bicentennial commemorations in the coming years.

“The idea of a three-year celebration, like Alabama has done, is unprecedented,” Day said. “We have used it to not only look back at the last 200 years, we’re also using it to look ahead to the next century as well.”