The University of Montevallo will feature Vonetta Flowers, the first Black woman in history to win a gold medal in the Winter Olympics, as the guest lecturer at its second Dr. Wilson Fallin Jr. Lecture Series.

The lecture will be held on Oct. 13 at 4:30 p.m. on the Rebecca J. Luker Stage in the DiscoverShelby Theatre in UM’s Center for the Arts. Tickets for the lecture are free but will be distributed on a first-come, first-served basis. They can be reserved at: https://montevallotickets.universitytickets.com/. 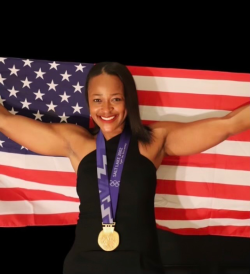 At the 2002 Winter Olympics in Salt Lake City, Flowers won a gold medal in bobsledding. She won the medal with her teammate, Jill Bakken.

As a native of Birmingham, Flowers wasn’t accustomed to ice, let alone the cold-climate sport of bobsledding. She was a sprinter and a long jumper – a track and field star – who became a seven-time All-American athlete in the sport while attending The University of Alabama at Birmingham on a track scholarship and as a first-generation college student.

Though she dreamed of representing the U.S. in track and field in the Olympic Games, her numerous injuries took a toll on her and she didn’t make the 1996 or 2000 Olympic teams.

But that did not end her athletic career or Olympic aspirations. She retooled and thanks to the keen eye of some bobsled coaches, became a bobsledder by learning to use the leg muscles she built up as a track star to push a 450-pound luge down an ice-covered track.

At the end of her first season in the sport, she and her teammate, Bonny Warner, ranked 2nd in the U.S. and 3rd in the world. Confident in her ability to compete against the best in the world, she again set her eyes on bringing home Olympic gold.

She connected with Bakken, who was the driver of their two-woman bobsled team, and they shocked the bobsled world, winning the first U.S. Olympic bobsled medal in 46 years.

Flowers returned to the Olympics in 2003 but didn’t finish in the top rankings. She returned to the Winter Olympics once more in 2006 in Turin, Italy, with a new partner, Jean Prahm. They finished in 6th place making her a two-time U.S. Olympian.

She retired from Olympic competition that year.

Her book, “Running on Ice: The Overcoming Faith of Vonetta Flowers,” was published on Feb. 1, 2005.

Flowers resides in Jacksonville, Florida, with her husband, Johnny Flowers, and their three sons, Jorden, Jaden and Jaxon.