The University of Montevallo welcomed Dr. Bernice A. King as the inaugural speaker for a lecture series that launched on Oct. 7 at the campus’ newly constructed Center for the Arts. 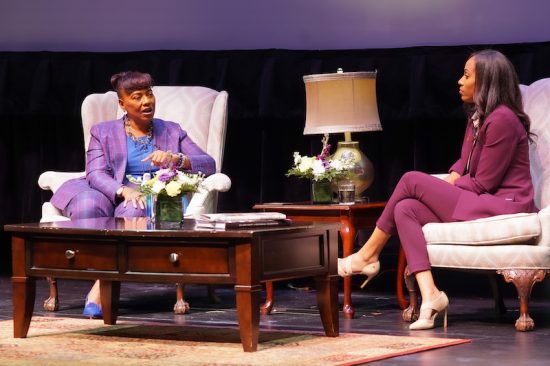 The evening began with an introduction by Dr. Gregory Samuels, the University’s chief diversity and inclusion officer and associate professor of secondary education, who challenged those in attendance to be guided by light and love.

Dr. Lolita Kincade, the University’s assistant professor of human development, family studies and counseling, moderated a discussion session that featured King, who spoke about several topics including the time she realized she was called to become a preacher like her father, Dr. Martin Luther King Jr. King spoke about being just five years old when her father was assassinated. She recalled later hearing an inner voice at the age of 16 telling her she would become a preacher like her father one day.

“I was taught many things growing up about love and forgiveness,” King said. “My mother was very instrumental in being a positive influence in my life. I believe children need to see their parents embody what they teach, and my mother played an important role in my life because she was very good at doing that.”

King is now an orator, peace advocate and the chief executive officer of the Martin Luther King Jr. Center for Nonviolent Social Change, also known as The King Center.

She spoke about how her father was aligned with truth and righteousness, and how she works to understand the worth of every human being.

“We want to make decisions that come from a desire of wanting the ultimate best for everyone,” King said. “People often draw from what is comfortable, but not always what is right.”

Addressing social justice, King said justice will prevail as long as people work toward that cause and align with it. “We are not the first generation to come through injustice, and we will not be the last,” King said. “The darkest hour is always before dawn. We might have a dark hour, but we will have a dawn.”

King said with the ongoing social challenges facing the country, she tries to help people understand that everyone is part of a family.

“I like for people to think of themselves as more than just an ally, because an ally means I am helping you with your problem,” King said. “This is not a black problem but a problem of humanity, a problem of a sick society; white supremacy and racism run deep across the globe. It is a sickness we have been dealing with from generation to generation, but we are nevertheless part of each other, part of the human family. But we have to fight racism and structural racism—institutional racism­—together. It is a mindset change first.”

After the moderated session, Fallin said he was honored to have King speak at the inaugural lecture. He recalled a time when Dr. Martin Luther King Jr. asked to use Fallin’s church in Bessemer as a gathering place for individuals prior to King’s march on Washington. “It really means a lot to me that Dr. Bernice King would come and speak,” Fallin said. “She carries a wonderful legacy.”

Upcoming lectures will feature a nationally-renowned expert in these subjects and will engage students on topics and inquiries on societal and educational issues. The lecture series has been recognized by the Alabama Legislature for its importance.

Following the moderated session, a book signing and reception was held in the lobby at the Center for the Arts. The evening concluded with a M.A.D.E. (Minorities Achieving Dreams of Excellence) student reception moderated by Josiah Garrett, Black Heritage Committee student representative, in the Meadows Black Box Theatre.

The University of Montevallo has been designated as a 2022-2023 Military Spouse Friendly School for creating sustainable and meaningful education paths for military spouses. This honor comes just three months after UM was named a Military Friendly School for both the 2021-2022 and 2022-2023 cycles – a designation UM has received numerous times in previous […]

Building back stronger than ever after weathering a pandemic that diminished the programs’ numbers by more than half, the University of Montevallo TRIO Upward Bound Programs is hosting a Math and Science STEM Day at the Lund Hall quad and intramural fields on Thursday, June 16 from 8:30 a.m. to noon. The fun-filled event featuring […]