As a high school student in Florida, Greg Key ’82 had never heard of the University of Montevallo until a chance connection between his high school principal and the UM baseball program led him to the beautiful brick-lined Montevallo campus. 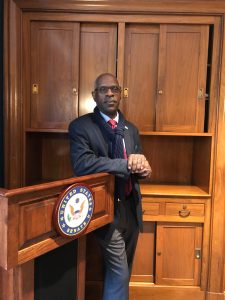 When then-UM head baseball coach Bob Riesener offered Key a tryout for the UM baseball team, neither of them knew it was the beginning of one of the most successful athletic careers in Montevallo history.

“I had a good feeling about UM the minute I walked on campus. The streets were paved with gold as far as I was concerned, and I still feel that way to this day,” Key said.

After earning a full athletic scholarship to the University in 1978, Key proceeded to rewrite the Montevallo baseball record books.

In 1982, he was drafted by the California Angels (now Anaheim Angels), becoming the first-ever Falcon to be drafted into the pros. He then recorded a successful career in the Minor Leagues over the next several years, and was inducted into the Montevallo Athletic Hall of Fame in 1999.

Throughout the years, Key has never lost his connection to Montevallo and its people. He credits Riesener with much of the success he has seen in his life, and still regularly talks with his UM teammates.

“The University and the friendships it gave me are priceless,” Key said. “Those were the best four years of my life.”

When the opportunity arose to name the UM baseball stadium in Riesener’s honor, Key did not think twice about supporting the effort. He said giving financially to the University should be a given for all alumni who want to see the University continue to thrive and produce excellent graduates.

“We all wanted to recognize the contribution Coach Riesener made to so many players’ lives. Everyone I know who played for him turned out to be very good members of society,” Key said. “I want to see every baseball player and student-athlete who comes to Montevallo have the same experience I did there.”

By giving to UM, Key said he is following one of the many life lessons he learned from Riesener.

“Coach Riesener always told us to focus on being good students, but also remember what this University is doing for you,” Key said. “It’s so important to make sure the next generation has that life-altering Montevallo experience.”