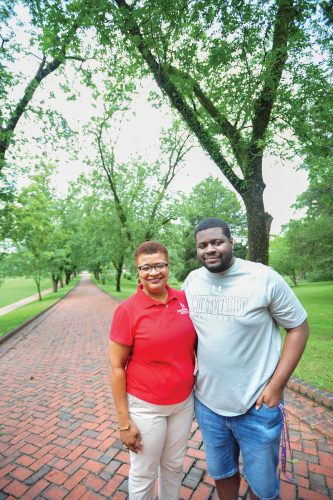 The University of Montevallo is steeped in traditions passed down from class to class — whether it’s the robing of the seniors at Founders’ Day, the intellectual smackdown of the Life Raft Debate or the month-long celebration of school spirit in College Night.

However, some alumni share an even greater sense of lineage with members of younger graduating classes: their children. Legacy students are individuals who walk the same brick streets as their parents or grandparents. There’s more benefit to being a legacy student than simply sharing memories, though. A special books scholarship is reserved for the children of active donating alumni who hold a degree from UM.

One of the current scholarship recipients is Stephen Gilbert, a longtime resident of Montevallo, whose parents met while attending school at UM in the 80s. After a brief stint working at Paine College in Augusta, Georgia, his mom, Sharon Gilbert, returned to Montevallo to work as the director of Upward Bound.

Because of Sharon’s role at UM, Stephen basically grew up on campus. He attended Montevallo Elementary, Middle and High School. When it came time to consider higher education, he had a simple reply when Sharon asked him where he wanted to attend. “Mom, why would I want to go anywhere else?” he asked.

Stephen is now a UM history major, sharing a similar love for the social sciences with his mother. “I’m happy because my son is following my scholarship and my legacy,“ said Sharon. During orientation week, Stephen said he met lifelong friends. Because he knew the community like the back of his hand, he acted as their unofficial guide to Montevallo.

The Howards are another family rooted firmly at UM. Mary and Joe Howard met and fell in love while attending UM in the late 80s and early 90s. Joe even proposed to Mary on the stage of Palmer Auditorium after she co-led the Gold Side to victory in 1991.

Their son Ryan now attends UM as an honors student preparing to enter his junior year. While Mary and Joe remain loyal alumni who return every year for College Night, they encouraged Ryan to make his college experience his own.

“Our hope was that Ryan would chart his own path at UM. So far, he has done this and has exceeded our expectations,” said Mary.

The familial bond has persisted however, with Ryan majoring in accounting like his father and following in Mary’s footsteps as an active and loyal Gold. He even penned the script that earned Gold Side a victory last February.

For more information on the legacy scholarship, visit montevallo.edu/alumni/scholarships or call the Alumni Office at
205-665-6215.

Many University of Montevallo students were honored for their achievements during the University’s Elite Night on Nov. 10. The event is a longstanding tradition dating back to 1933, and honors students who have demonstrated outstanding academic and leadership abilities during their time on campus. Faculty in each academic department select the student Senior Elite honorees, […]

Your home: Montgomery  Your hometown: Mandeville, Louisiana  Tell us about your family: I am the oldest of eight children. Both of my parents were raised in Tennessee before meeting at The University of Alabama. I was born in New Orleans, and after a few years in Tennessee we moved back to Mandeville where I was raised.  What is […]