Two of the top law schools in Alabama have Montevallo alumni at their helm. 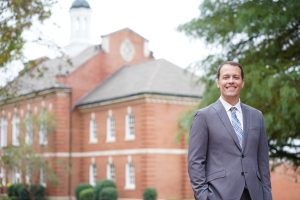 Hudson came to Cumberland this summer in time for the school’s celebration of 175 years of legal education.

“I’d been teaching and practiced environmental law in Houston for a couple of years,” Hudson said. “I was interested in research and writing.”

Hudson grew up on forest land in southwest Alabama. His interest in the land directed his path when he came to Montevallo, and the professors inspired him in ways he never considered.

“The great thing about Montevallo — you cannot overstate the value of that liberal arts education and really diving in and taking advantage of the breadth of experience that
a place like Montevallo provides,” Hudson said. “Had I not done that, I would not be here.”

“Had I not been at a liberal arts school that forced me to reach out into other departments, I would not have gone into law.”

“He put me as a co-author as a student,” Hudson said.

Dr. Clark Hultquist, now professor of history and chair of the Department of Behavioral and Social Sciences, mentored Hudson on another research project studying Depression-era advertising, including works from Hudson’s native Clarke County.

“Those experiences not only gave me a research bearing but also, the professors reached out and made you a colleague that showed the value of pouring into younger generations,” Hudson said. “That was transformative in my development to the profession that I’m in today.”

Hudson said his professors at UM showed him that if he wanted to work with natural resources, the law was a great path for it. 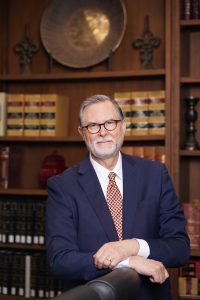 Brandon has been the dean of the UA School of Law since 2014.

Like Hudson, he credited the liberal arts culture of Montevallo with giving him exposure to the larger world.

“It educated me broadly and deeply in the sciences and the liberal arts, including history, philosophy, oral and written expression, social inquiry, the fine arts and psychology,” Brandon said. “It provided my first systematic exposure to critical thinking.”

“And it provided opportunities for leadership — not that I was a great leader. I wasn’t. But I learned a lot, and many of the lessons have served me well.”

He said UM also connected him with students “who were smarter, more talented and more interesting than I was — than I am.”

Many of them, Brandon said, remain friends.

“They inspired and nudged me to raise my game. I am better for having known them.”

He also said the excellent teaching at Montevallo served as a foundation for his career in the law.

“My professors challenged me to do my best. They helped me learn to write — it’s still hard work. They expanded and sharpened my mind. And in doing so, they changed my life.”

Brandon said the student experience at Montevallo is so multifaceted that it’s impossible to sum up with a single moment.

“The experience is marked by hundreds of people, events and ideas — within and outside the classroom,” he said. “They make for a place that’s not only physically beautiful but also intellectually stimulating and culturally rich.”

“It was also an awful lot of fun.”

Where are you from and what city do you currently reside in? I am from Montevallo, but I now reside in Helena. What is your title with the University of Montevallo? I am blessed to be the chief of police and director of public safety. What degrees do you hold and from what schools? I […]

Falcons In Law: Alumni Lawyers Soar Far in the Field of Law

Montevallo doesn’t have a law school, but many graduates hold juris doctorates. These Falcons who have made their mark in the legal field share their Montevallo experience. Ben Mark Baxley ’87 Wetumpka, Alabama, assistant attorney general chief of the Opinions Division Office of the Attorney General for the State of Alabama “I entered the University of Montevallo […]

Raised by a grandmother with alcohol addiction in a dysfunctional home in a trailer park in the small, rural Pike County town of Brundidge, Alabama, Grainger Community Counseling and Wellness Clinic Director Dr. Latofia Parker knew from an early age that academic success was the way to rise above her circumstances. “My mom was 16 when […]