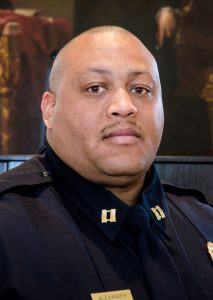 The University of Montevallo has announced the appointment of Tim Alexander as chief of police and director of public safety. Alexander brings more than 20 years of law enforcement experience to the UMPD. For the past 12 years, Alexander has worked for the City of Montevallo Police Department, where he currently serves as captain. He will begin this role at the University June 1.

As captain for the City of Montevallo, Alexander has been responsible for day-to-day operations of patrol, investigations, communications and the narcotics division. In October 2017, he was assigned to the Shelby County Compact 2020 Drug Deterrent Initiative Program. This program is focused on intervening and saving potential juvenile drug users, providing them with community-based partnerships to prevent future addiction.

Prior to his role as captain, he served as a narcotics investigator assigned to the Drug Enforcement Task Force Group 42 in Birmingham. Alexander also served as a deputy sheriff for the Shelby County Sherriff’s Office where he was an active member of the Tactical Response Unit and later assigned to the Criminal Investigations Division.

In announcing the new chief, Vice President for Enrollment and Student Affairs/Dean of Students Tammi Dahle said, “The University is excited to welcome Tim Alexander as our new chief of police and director of public safety. As a lifelong community member, Tim has protected city and county residents for many years. He has also received several awards for his service and dedication to the community. We look forward to Tim joining the University of Montevallo family and providing that same dedication and service to our UM students and campus community.”