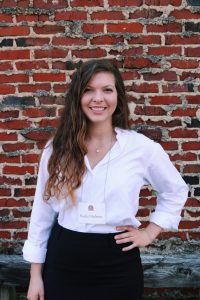 Holmes, a psychology major and member of the 2017 spring graduating class, was honored with the Algernon Sydney Sullivan award for her work with Grace to Ukraine, an organization dedicated to the aid and betterment of orphans in the country of Ukraine.

She has worked with this organization as well as others with similar goals since 2008, and was presented the award for outstanding character and commitment to others.

The Algernon Sydney Sullivan Award is a national award given to college seniors and community members who exhibit exemplary character through extracurricular humanitarian work.

The Foundation is made up of a network of 70 colleges across the south, primarily small liberal arts universities. The Sullivan Award has been presented since 1890, predating the Foundation itself, and remains a humanitarian institution to this day.

“Rachel is a wonderful student with an impressive academic record,” said Dr. Kristen Gilbert, professor of psychology at the University in her nomination of Holmes. “She is among the elite in the Psychology Program and at UM. She is very deserving of this award.”

Other activities in which Holmes participated included Golden Key Honor Society, Sigma Alpha Pi Honor Sorority and the BCM leadership team as missions leader. She was also the recipient of the 2016 Psychology Rising Scholars Award.