By the time Cage Williamson stepped onto the brick streets to begin his freshman year, he had  already founded a non-profit and was operating his own custom car parts business.

Williamson was raised in the small town of Hazel Green, Alabama, where he learned from an early age to take every opportunity given to him and run with it.

“I knew that I needed to be involved and not just because my dad told me so. I had an early grasp on how important it was to have a strong resume and a strong background for college and things of that nature,” he said.

Despite unprecedented entrepreneurial success by the age of 18, Williamson knew a college degree was always in his future.

Initially, he majored in art, a passion picked up in his childhood from mornings spent tracing the crude notebook sketches of “Blue’s Clues.” Gradually, those crayon doodles morphed into photo realistic portraits with charcoal.

Williamson eventually realized his passion for art wasn’t where his career goals aligned, so he shifted direction to a business major.

Like a true liberal arts student, Williamson found an outlet for his natural artistic instincts in  developing marketing materials for his classes.

“The business college here is extremely unique in that when you’re in the classes, you’re certainly not going to be lectured without  practicing what you learn,” he said. “Some of my greatest learning experiences have been in marketing classes where I’ve gone out and developed a marketing plan for an actual company.”

According to Williamson, a few of these clients include the City of Montevallo, The Arc of Shelby County, Alabama Wildlife Federation and the local Boys and Girls Club.

While juggling a packed class schedule as a double finance and marketing major, Williamson has maintained an impressively diverse on-campus life: he is the current SGA student trustee, a Montevallo Master, a Montevallo Maven, resident assistant, member of Phi Chi Theta and captain of the UM track and field team.

“Even freshman year it was easy to come in, get involved, speak, listen and see that my thoughts and opinions mattered,” said Williamson. 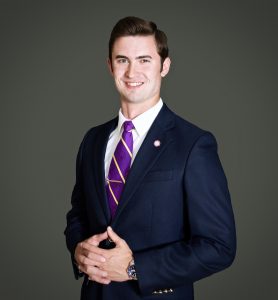 The first was as a communications intern with the U.S. Army Security Assistance Command at Redstone Arsenal in Huntsville.

This past summer, Williamson worked with Stratolaunch Systems, a private company started by Paul Allen, co-founder of Microsoft. Stratolaunch recently unveiled its design for the world’s  largest plane, currently in the testing stages.

The company’s goal is to use this plane to provide a more affordable means to launch satellites into space without the use of costly vertical rockets. Williamson  interned with the company’s business operations office in Huntsville where he assisted with contracts and purchasing materials.

Whether he further pursues custom car parts or leading a marketing team, Williamson’s ultimate career goal is to work toward something that helps others.

“At the end of the day I want to look at what I’m doing and say, ‘How am I helping somebody?’ or ‘How am I making the world a better place?’,” the UM senior said. “There’s a million and one ways to do that and that’s why I don’t have a specific direction I want to go right now.”

Angel Perry, a University of Montevallo graduate student pursuing a master’s degree in counseling with a specialization in clinical mental health counseling, was selected as a recipient of the prestigious Albert Schweitzer Fellowship of Alabama. The Alabama Fellows Program is one of thirteen active Schweitzer programs across the U.S. dedicated to developing a pipeline of […]

This past summer, Allie Dishman, a junior majoring in biology on a pre-med track, participated in the opportunity of a lifetime. She worked at the Harvard Medical School National Center for Functional Glycomics under the esteemed Dr. Richard Cummings ’74, the Center’s director and a University of Montevallo alum. “Words can’t describe how amazing it […]

Gemali Alcantara is a first-generation college student from Honduras. Without any guidance, he aspired for more and so he sought it out. College was the route that he decided would be best, but he wasn’t sure how he’d pull that off. Then, the University of Montevallo opened a door. “Many schools accepted me, but none […]