During the University of Montevallo’s Homecoming activities on Friday, Feb. 9, the student body crowned seniors Brian Kirkwood and Amber Quinn as Mr. and Ms. Montevallo. 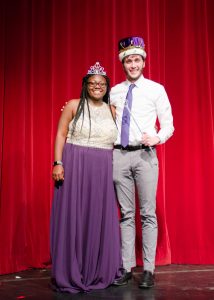 Each year, the titles of Mr. and Ms. Montevallo are awarded to two seniors whose peers believe exemplify the top qualities of a University of Montevallo student.

In the fall, nominees are first tasked with gathering signatures from fellow graduating seniors in order to qualify for the honor. From there, a preliminary vote is held to narrow the list of contenders down to the top three male and female candidates.

It isn’t until the spring semester that the final ballots are cast, and Mr. and Ms. Montevallo are announced on the stage of Palmer Auditorium during the Friday night performance of College Night productions.

“Our class nominated nothing but wonderful people for this year’s ballot. It was an honor to be standing next to fellow students knowing how loved they are by our peers and witnessing their determination and strong work ethic,” said Quinn.

Quinn, a Jacksonville, Alabama native, has demonstrated well-rounded campus involvement throughout her time at the University. In addition to serving as President of the Tau Pi Chapter of Zeta Phi Beta Sorority Inc., Quinn is a member of the National Society of Leadership and Success, the University Program Council, Minority Student Union and captain of her intramural team.

Quinn also combines her experience as an art major with community involvement as a volunteer photographer for the Shelby Humane Society.

From serving as vice president of SGA to helping found the University’s chapter of Phi Gamma Delta, Huntsville, Alabama native Kirkwood has participated in his fair share of extracurriculars during his four years at UM as well.

Kirkwood also spent this past summer completing an internship under the direction of UM alumnus Dr. Richard Cummings at the National Center for Glycomics Research lab, located in the Beth Israel Deaconess Medical Center of Harvard University.

“It is an immense honor to be selected as Mr. Montevallo. This school and its residents have done so much for me in my time here,” said Kirkwood. “While I am excited to begin my next chapter, I will forever remember the lifelong connections I have made here.”