University of Montevallo junior Alexandria Hawkins has been set on a career field in law since she was in elementary school, and UM is helping her to build a solid foundation for her future goals. 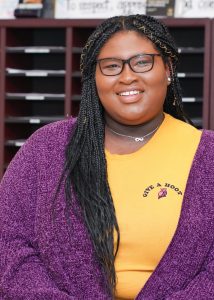 Hawkins is majoring in sociology with a concentration in criminology, and is completing a minor in African American studies.

“I like to study crime, and I’ve wanted to be a lawyer since the third grade,” Hawkins said.

Hawkins didn’t hesitate to call an African American studies course she took with Dr. Sierra Turner in fall 2019 her favorite class to date at UM.

After graduating, Hawkins said she plans to attend law school and one day would like to be a juvenile defense attorney.

“I have a strong maternal instinct, so I think that’s leading me to want to work with juveniles,” she said.

During her time at Montevallo, Hawkins has found no shortage of ways to get involved on campus. She has served as an orientation leader, has helped with Purple Side productions and worked at the Shelby County Juvenile Detention Center through the Falcon Scholars program. She currently is the University Program Council coordinator with the Student Government Association.

The combination of a top tier educational experience and plenty of ways to get involved has led to a strong sense of belonging for Hawkins.

“When I first visited Montevallo, I fell in love with the campus,” she said. “It feels like another home.”