University of Montevallo senior theatre major Amber Hayes has already made great strides toward her dream job of acting in New York City, and she credits UM for helping her get there. 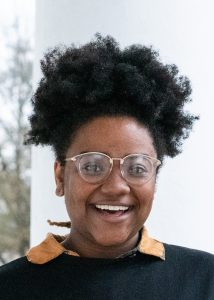 Hayes recently returned from a 10-day experience in The Growing Studio’s LINK Program, which took her to New York City to meet and audition for several theatre companies in the city. Although she has not yet graduated, she has already received interest from agents looking to work with her after she earns her bachelor’s degree in May.

“I met a lot of great people and was able to do a lot of networking through that program. I was so happy to be chosen,” Hayes said, noting only the top 16 applicants were chosen for LINK out of hundreds from across the nation. “Montevallo is the reason I was able to go to that program. An anonymous donor heard about it and funded my way, and without that I wouldn’t have been able to do it.”

In addition to the LINK Program, Hayes has also been heavily involved on campus during her time at Montevallo. Her sophomore year, she was an assistant lyricist and a lead actor in the Purple Side College Night show, and was lead lyricist in the show the following year. This semester, she directed the Purple Side show and helped secure a Purple Victory in College Night.

She is a member of Delta Sigma Theta Sorority Inc., the M.A.D.E. program, Minority Student Union and has been involved in several theatre productions on campus.

“I really try to dabble in everything, and that’s because I love it here and I want other people to know what they can get out of the programs here,” she said. “Opportunities arise here if you get involved.”

Growing up with strong family ties, Hayes said Montevallo was a natural fit for her.

“Back home in Montgomery, everything is very family oriented. When I came here, I got the same feeling that I’m right at home,” Hayes said. “Everything about Montevallo is great. There is an overall feeling that everyone is accepting of everyone else. It’s just so different from other schools. It’s almost a magical feeling.”