As a University of Montevallo new student orientation leader, sophomore Jay Mobley frequently hears the same question from those who are beginning their journey at UM: “How did you know you belonged at Montevallo?”

“We get that one a lot,” Mobley said with a laugh. “You hear the phrase ‘You belong at Montevallo” at lot, but it’s so true. It could be home for anyone.” 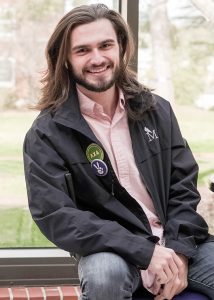 Mobley found his place in the UM Department of Theatre, and is working toward a bachelor’s degree in theatre.

“Theatre is something that Montevallo is known for,” he said. “The department is so diverse. That diversity in the department and on campus is the reason I came to Montevallo in the first place.”

After graduating, Mobley plans to seek a career with a touring theatre company or with the Birmingham Children’s Theatre, while also possibly earning a master’s degree in directing.

Over the past couple of years, Mobley has become extremely active on campus.

He is a member of the Lambda Chi Alpha fraternity, where he served as vice president and philanthropy chair last year, and is the fraternal educator this year. In addition to serving as an orientation leader, he is also involved in College Night’s Purple Side.

Each year he has taken part in College Night, Mobley said he is reminded of the family UM represents.

“You see a lot of adults who come back to College Night every year because they found their place here,” he said. “Everyone comes from different lives, different backgrounds, but we’re all united by this central theme of the community we have here at Montevallo. It’s one huge family.”