Esports is rapidly gaining recognition as a sport. Internationally, players and teams have earned millions of dollars and have garnered the notice of major athletics brands such as Nike and Adidas.

Esports is short for electronic sports and serves as a broad term to describe any video game played competitively. These games are typically played on computers or dedicated video game consoles by teams across the country and can be viewed by audiences via the internet.

Last year, according to Riot Games, the creator of the popular “League of Legends,” the game’s world championship match attracted more than 96 million viewers. To put that into perspective, the NFL reported that Super Bowl LIII in 2019 attracted 98.6 million viewers.

Because of the sport’s growing popularity, the University added esports to its growing roster of intercollegiate athletics teams for the 2019-2020 academic year. 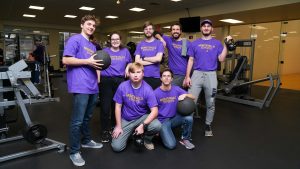 The team has a physical training regimen. This is designed to help them avoid repetitive stress injuries and to increase their stamina and overall fitness.

This year, the team added approximately 15 players, building a full roster from nothing in only a matter of months. Many of these students are also receiving scholarships to play for the team.

Coach Brendon Beal has placed an emphasis on his players being well-rounded college athletes.

Many are surprised to learn that the team has a physical training regimen. This is designed to help them avoid repetitive stress injuries and to increase their stamina and overall fitness. This approach once again mirrors the training and expectation placed on current professional esports athletes.

Physical training is a major aspect of the program that Beal said will impact the success of the team. The players’ physical readiness will improve their abilities in-game and help them stay injury-free during a long season.

Even though the program is not currently one of UM’s 21 intercollegiate sports that fall under the Athletics Department, its players are still treated as student-athletes. This decision was made in order to smooth a possible future transition into UM’s Athletics Department. This means that all of the same restrictions placed on traditional sports are also placed on the esports team.

Requirements such as GPA restrictions, class attendance and drug testing are placed on these students, ensuring that they are at peak performance, both academically and physically. These restrictions help the team support the University’s mission to create not only well-rounded athletes but citizens out of its graduates.

The team’s main focus is on the game “League of Legends,” a third-person massive online battle arena game (or MOBA) that pits players against other players in a format similar to capture the flag. The game requires five skilled players to assume various roles utilizing one chosen character for each game in a best-of-five match.

Prior to each game, the teams go through a draft phase. Much like when professional teams select players from a pool, esports players must select characters from a pool of available “champions” to compete with. These champions, or player characters, offer various strengths and weaknesses to the player.

Because of this, choosing characters involves series of strategic choices by the team to create a composition of these champions with various in-game strengths and weaknesses.

These tournaments vary in their structure, with some played as round-robin competitions while others take the form of a single elimination bracket, which can make it hard for a new team to get both the exposure and play experience needed to be competitive.

In the first few months of the University team’s season, they have already competed against some of the top collegiate esports teams in the country.

Beal remains optimistic, as he expects that this tough schedule has prepared the team for conference play.

“I don’t think we should be ashamed; I think we know what we should work on,” said Beal after an early loss to Arizona State University.

The team’s season and tournament structure are in constant flux as the Peach Belt Conference and other regulators of college athletics determine what an esports season will look like in a collegiate setting. Major changes have been made even just weeks before the semester, as the team’s roster and the structure of the league continue to solidify and collegiate athletics programs begin to react to the inclusion of esports.

By Emily Reed   When Kacie Kilpatrick graduated from the University in 2009, she started attending alumni activities immediately.  “I wanted to be involved as an alum, and give back to my University that had already given me so much,” Kilpatrick said. “We [alumni] have a lot of really fun events, such as a College Night […]

By Emily Reed   For Dr. Sierra Turner, creating opportunities for more diversity at the University is a key goal.  “I am responsible for cultivating relationships with minority communities in and around Montevallo in order to increase the diversity of our student population,” Turner, who is the University’s chief diversity and inclusion officer, said. “I am always looking […]